What fraudulent advertisements did the swindlers give in the news?

Which oil is good for health for Gujaratis?
Plant this fruit and earnings at a cost of Rs 1 lakh in 1 Vigha, Learn the story of successful farming
No one in India will remain uneducated if everyone does like this 8 year old child
In an advertisement published in a Gujarati newspaper, it has been stated that the jobs that can be done sitting at home without the help of Kovid-19. All the cities, talukas and districts of Gujarat state are invited to apply for the following vacancies based on 11 months contract. We are working with the staff of Kovid-19 with less staff so that all the interviews will be conducted by phone, all the forms and fees will have to be filled online as well as all the correspondence will be done through e-mail of which special note should be taken. 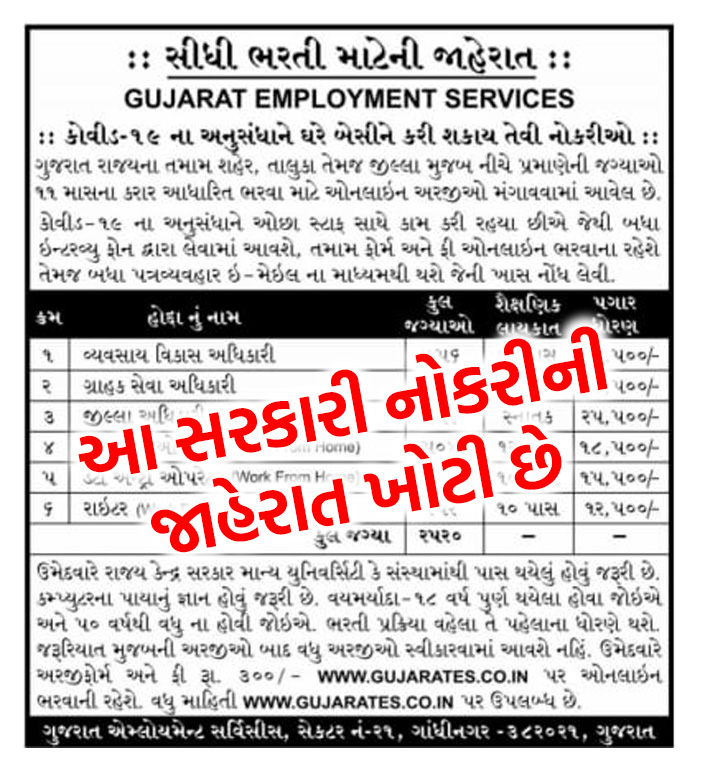 The ad is incorrect because …

The public information given in the newspaper is completely false. Because, it is suspicious to do all the transactions online in the advertisement, interview on phone, correspondence through e-mail. There is a website with a mixed name like government website. The talk of government positions is wrong.

We have no complaints: Revenue Department

Police have come into action after a campaign launched by VTV in the interest of the youth. An investigation has been launched into the advertisement circulating on social media. In this regard, DySP M. That. Rana said that all police stations in Gandhinagar, LBC and SOG have been notified. No complaint has been received in this regard yet. An investigation has been launched based on the information we have received. Check the address given in the advertisement. Further action is guaranteed on the basis of the plaintiff’s complaint. The deceived people have been instructed to contact the police. Advertisement fraud case should be filed.

In the advertisement, in the mixed name of the website of Gujarat Government

GET LATEST UPDATES ON MAIL