Gujarat will be launched gradually from April 20, with these rules, know which works are allowed. 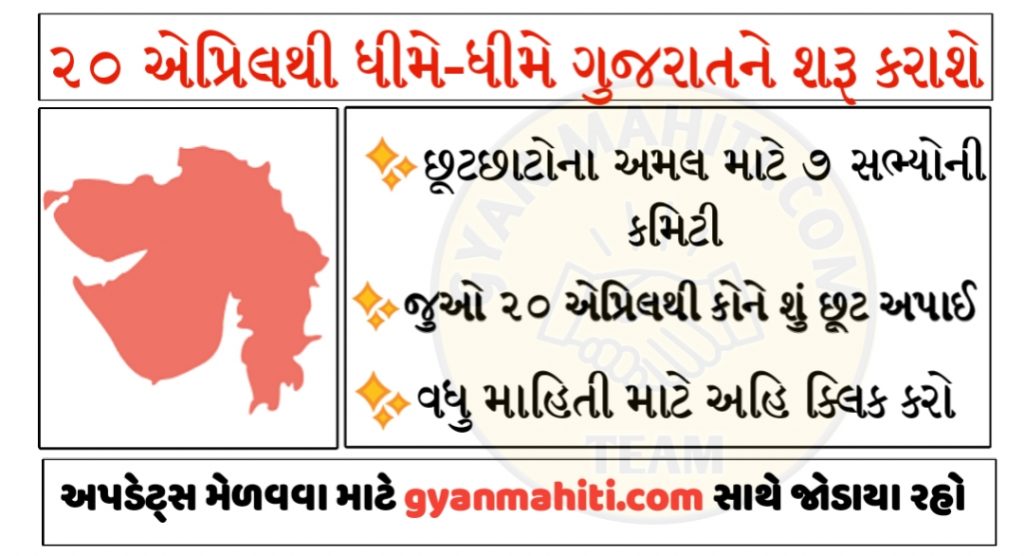 Corona virus is rampant in Gujarat. After Ahmedabad, curfew has also been announced in Surat. CMO Secretary Ashwini Kumar informed about this at a press conference today. One of them has been declared curfew in five areas of Surat since midnight. On the other hand, while giving relief news on the other hand, there will be a partial concession in industry in the state from the 20th. The hotspot and then the content area will be determined. The boundaries of the areas will be set. The health department and the Municipality will decide. You have to get approval to start the industry.

Partial relaxation from April 20 in the state

Thinking of starting a business too

Strict adherence to the rules will ensue

The industry in Jaya will offer partial discounts from the 20th

The hotspot and then the content area will be determined.

The boundaries of the areas will be set. The health department and the Municipality will decide. We have to get the labor to start the industry

7-member committee for the implementation of concessions

There will be a Collector, Health Officer, Factory Inspector Committee. The committee will decide which industry to exempt. With this, 39 market yards have been functioning since today, he said. These include the local head of GIDC, labor and employment department officer, chief district health officer, factory inspector, deputy municipal commissioner in the municipal corporation area and general manager of the district industry center as member secretary. The committee will give approval for the operationalization of commercial and industrial units as per the guidelines of the Government of India.

See who was exempted from April 20

There will be employment in rural areas under MGNREGA

Can be worked under MGNREGA for water storage

Roads, irrigation and construction outside the cities can be continued

Construction can also be continued in urban areas

An electrician, plumber, will be able to start carpentry work

The motor mechanic has been exempted from work

These rules have to be followed

The factory will have to be sanitized

Meal time should not be together

The factory owner will be responsible if there is congestion

The factory will be closed if the rules are not followed

Thermal guns will be mandatory in the industry.